A fearless, funny, pure soul has left our world. I’m honored to have known Murphy Roberts for a brief but significant time.

The fall of 2008 was one of the most memorable experiences of my life. I’d met Dylan Roberts that summer while working for the Obama campaign in Denver. I wanted to keep working for the campaign after my summer position ended, but I hadn’t found a position I liked, and money was tight, so I went back to Indiana to figure out what to do. Dylan took time off from college and ran the NW Colorado campaign office in his hometown of Steamboat Springs. Eventually, his family gave me one of the best gifts I’ve ever received. They brought me out to live with them and work for the campaign in a position I truly loved.

I had only met Dylan’s sister before that, but the whole family immediately made me feel incredibly welcome. I felt very at home in their close-knit family. My sister and I are best friends and we’re always laughing and goofing off with our parents, and the big log house on Fox Lane operated the same way. There was never a dull moment around Lulu, Stu, Dylan, Hig, Cassady, and Murphy.

My position was the volunteer coordinator, which included training and directing volunteers. I had so many incredible, dedicated volunteers, and out of all of them, 14-year-old Murphy emerged as my favorite. Every day after school, he came to the office. While other volunteers were nervous about knocking on doors, he loved it. In fact, he asked to go to the neighborhoods where we weren’t as welcome. He would even go up to houses not on the canvass list, ones with McCain signs in the yard, eager to talk to them and try to change their minds. My secret was that, even after months of intense campaign work, knocking on doors made me nervous. I was glad to stay in the office and just teach others how to do it. But he loved it.

I’d always thought it would be fun to have a little brother, and I got a glimpse when Murphy was around. At one point, he confessed to me a guilty secret – that he’d thrown a rock through a car window when he was 10. Because the car had a Bush-Cheney sticker. He joined in our inappropriate office humor (the jokes we made after most volunteers had gone home) and tried to get me to go skateboarding with him. I took this photo on Halloween. While looking through my Facebook photos from that time just now, I laughed out loud from several funny comments he’d left.

I wish I’d gotten to see Murphy since then. He was so goofy and a wise old soul at the same time. He was the youngest in the family, yet he had an outsize presence. He accomplished great things and was on the way to doing much more. The world is richer for having had him and poorer without him, although I know he has made far too much of an impact to ever fade away. I’m so sorry for this tragic accident and that his wonderful family and friends are facing this loss. I am glad he was living the life he loved.‪#‎senditformurph‬ 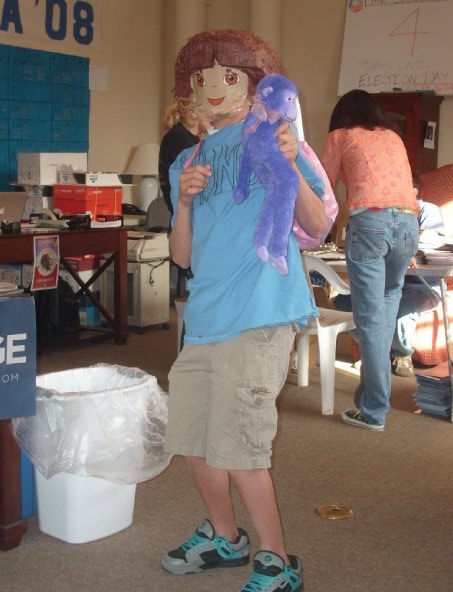